I AM NOT YOUR MELODY 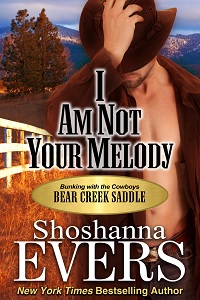 “Big Bad Bill” Edwards, the biggest, baddest cowboy in Bear Creek Saddle, Idaho, has only gotten meaner in the years since his bride Melody died young…

Miami bartender Allie Crawford has no idea what she’s getting into when she buys half-ownership of the sexy cowboy’s bar, inherited from his late uncle. She’d thought they’d built a friendship based on several months of emails back and forth. But in person, Big Bad Bill will do anything to keep her at arm’s length… only he can’t. The man is sinfully sexy trouble — big trouble. Especially since Allie is just one year out from when her cheating ex destroyed their marriage.

How can Bill and Allie be together if their hearts can’t handle the risk of breaking once more?

Bill has just three rules for dealing with Allie: Don’t kill her. Don’t kiss her. And above all, don’t fall in love…not ever again.

Just $3.99
Amazon, Amazon UK, B&N, Smashwords, iBooks, Kobo, ARe
Add this book on Goodreads!
Sign up for my newsletter to be notified when the next in the series releases!
Excerpt from I AM NOT YOUR MELODY
Copyright 2015 Shoshanna Evers All Rights Reserved
Bill could feel Allie’s excitement in the air. It was contagious; her energy enveloped him like an embrace. He grinned at her.
“I suppose we could put signs up on the bulletin boards around town,” he suggested.
“And take out an ad in the county newspaper!” Allie added.
He hadn’t thought of that for some reason. “Good call. You’re smart.”
She gave him a look, like she couldn’t tell if he was making fun of her or not.
“I already knew that,” he added. “From your emails. But I like seein’ how your brain works in action.”
Her blonde hair was still a bit disheveled from when he’d had his hand over her eyes. Carefully, he reached over and smoothed back an errant piece. Her hair smelled good, like some kind of flower, something he’d smelled before. Jasmine? Lavender?
How strange that this woman he’d been exchanging emails with for three months now was here, in person. And he’d never known what she looked like, never pictured her as this beautiful, smart woman all wrapped up in a tiny package.
Allie smiled. “Thank you.”
He couldn’t help but to watch her lips. The top one was a bit smaller than the bottom one. Every once in a while she’d pull out a lip balm and smear it on without a mirror. Cherry Chapstick. It made her lips look a bit pinker, a bit shinier — but still natural. What would that taste like?
No. Kissing her was a bad idea. They had a business to run together. Getting all tangled up in a fling could ruin their working relationship permanently. And that was the only sort of relationship he could ever have…business.
“You’re beautiful, too,” he told her, barely aware he was speaking out loud. “I don’t know how to act ‘round you.”
A pretty blush colored Allie’s cheeks. “Same as before, I guess. Before we ever saw each other.”
“But it ain’t the same,” he said, “bein’ with you here.”
“I like when you’re nice to me.” She gave him a playful tap on the arm. “Sometimes it seems like you’re just being ornery to keep me at arm’s length.”
“Yeah,” he said. “That’s clearly not workin’.”
Don’t over-think it, man. Just go for it.
He wrapped his arms around her, pulling her close to him. Her body was putty in his arms, so accepting. She looked up at him as if she knew exactly what he was about to do.
Bill went for it. He kissed her hard, needing to put every ounce of emotion he had into that kiss. It was a kiss that said You are beautiful, and it was a kiss that said I’m glad you’re my partner. It was a kiss that said I can’t do anything at this moment, other than kiss you.
Her lips opened to receive him, his mouth, and Allie moaned. Their bodies pressed against each other, tightening with unfurling lust. The kiss deepened. She pulled his lower lip into her mouth and gently bit it.
His body responded readily, and she was right up against him, so she knew it. Yet she wasn’t pulling away… They could hook up right that moment, right there on the floor of the bar, and fulfill every desire he’d had since he first threw her over his saddle. She was up for it, he knew by the way she tangled her small hands in his hair on the back of his head, pushing his hat forward until the rim touched her own hair, too.
The way she gasped as he kissed her neck made him wish he could simply devour her with his need.
Yes. She wanted him too. Maybe even as much as he wanted her. He stifled a groan of desire as she shifted her weight, pressing right against the large bulge in his jeans.
Wait. Don’t do this, not with her.
Reality hit him. He would be in business with Allie Crawford for a long time. Getting intimate with her was not the best idea, no matter how much he wanted her. It would complicate things.
And being with her was dangerous. Very dangerous.
After what happened with Melody, Bill had long-vowed he would never fall in love again.
*****
Just $3.99
Amazon, Amazon UK, B&N, Smashwords, iBooks, Kobo, ARe
Add this book on Goodreads!
Sign up for my newsletter to be notified when the next in the series releases!
Need to copy the links? Here you go!
Amazon: http://bit.ly/Melody_Amz
Amazon UK: http://bit.ly/Melody_AmzUK
B&N: http://bit.ly/Melody_BN
Smashwords: http://bit.ly/Melody_SW
iBooks: http://bit.ly/Melody_iBooks
Kobo: http://bit.ly/Melody_Kobo
All Romance eBooks: http://bit.ly/Melody_ARe
Add this book on Goodreads! http://bit.ly/Melody_Goodreads