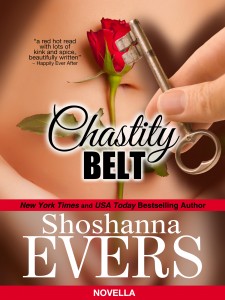 When handsome GC client Jonathan Syler goes up on stage and locks her into a chastity belt, it’s all supposed to be part of the fun. But Jonathan makes it clear he won’t be unlocking her anytime soon.

Reader’s Advisory: This book contains a hot girl-on-girl tease and denial scene and some F/F/M action.

This 22,000 word novella by bestselling erotica author Shoshanna Evers was originally published by Ellora’s Cave Publishing in April 2011 under the same title.

And now, an adults-only excerpt!

With the blindfold on, she had no idea how long she’d been there or how much longer she would be enduring the talented tongues of the Gentlemen’s Club clientele. Then she heard a familiar voice. Jonathan. Her pulse inexplicably raced at the sound of his voice as he leaned into her ear. She could feel the warmth of his skin, feel the whisper of his hot breath on her ear and smell just the slightest whiff of expensive cologne.

“Have you had enough, Georgia?”

Georgia didn’t know what to say. She instinctively tried to close her legs, forgetting again that they were bound far apart.

She felt his hand drop between her thighs and she moaned as he dipped his finger deep inside her pussy—and there was definitely no plastic wrap there. His finger felt so good and so wrong at the same time. She shouldn’t be letting him do this. How could she want Jonathan so much when she had just been thoroughly sated by a dozen other men?

Of course. It was all that talk about the chastity belt. Casey had to have been behind that—she must have tutored Jonathan on exactly what to say to have Georgia begging for more. That had to be it. Right?

She heard the other men in the audience start cheering and clapping. What on earth were they going on about now? Then she felt it.

Something smooth and cold as ice was being slid under her buttocks. It felt like a thin piece of metal nestled against her ass crack. The same metal, but wider it seemed, pressed against her pussy and then she felt Jonathan’s hands firmly gripping her waist. She heard a click.

The applause grew louder. What on earth? She fought the urge to say “umbrella” and get the hell out of there. She wouldn’t, not now.

The blindfold came off. Georgia squinted at the bright spotlight until her eyes readjusted. Jonathan smiled and knelt before her, dropping a tender kiss to her inner thigh in a quick, almost secretive motion before he uncuffed first one ankle and then the other. She looked down—what had he placed on her?

She gasped. It couldn’t be. Georgia didn’t say a word until Jonathan uncuffed her wrists. The she immediately grabbed at what looked like a stainless steel thong between her legs. It was literally locked into place.

No way. She had to be dreaming. Fantasizing still. Because if this was actually happening, then she was in way over her head.

“Get this off of me!” she said, struggling to keep her voice calm.

Jonathan grinned. “Of course, it’s just part of the show,” he whispered. “The men just like to see it, that’s all. Now pick up your money and blow a kiss to your fans.”

Her money? Oh, that’s right! She looked on the ground below the chair and saw it was covered in ten- and twenty-dollar bills. She grinned and picked them up quickly, trying to look as sexy and graceful as possible while crawling around under the chair on her knees. She couldn’t count it just yet, she’d have to wait until later. After Jonathan unlocked the chastity belt.

Georgia picked her rumpled clothing off the floor before she stood and did as Jonathan said, smiling and blowing kisses to the audience. She walked off the stage, naked except for the metal device locked around her groin, and sauntered into the back office. The cash sure felt nice crumpled in her hand.

She looked over her shoulder. Good. Jonathan was following her with the key. She knocked on the office door and when she didn’t hear an answer she stepped inside. Jonathan stepped into the office and closed the door quietly behind him.

My goodness, he’s a handsome devil. Georgia smiled and turned to put her bra on.

“I’ve seen you naked,” he said, amusement creeping into his deep voice. “Why would you turn around so I can’t see your breasts as you dress?”

Georgia laughed and turned around again. “I don’t know. Can you unlock me so I can put my panties and skirt back on?”

“You can put your skirt back on over the chastity belt.”

The thought stopped her cold. Her fantasy was just that, a fantasy. She could never act it out in real life, even if the thought turned her on. It just wasn’t rational. “Um, no thanks. I’m leaving now, so…unlock me.”

Jonathan fingered the key in his hand before slipping it into his pocket. “No.”

What does he mean, no? Her pussy clenched in excitement at his refusal, but she shook her head. It had been fun to talk about, but this wasn’t actually going to happen. She was done. She was taking her money and going home. Georgia quickly counted through the cash in her hand. Whoa. Two hundred dollars. That plus the one hundred from Vincent and Mary Ann and she had just made three hundred dollars in an hour.

She looked up at Jonathan and sighed. “Umbrella, then. I’m ready to call it a night.”

“And I said no. I will not unlock your chastity belt.” Jonathan’s handsome face was serious and thoughtful.

“Didn’t you hear me? I said the safeword. I said umbrella, that means I’m serious and you have to unlock me.”

Jonathan took a step toward her and she had to tilt her chin up to gaze into his deep brown eyes. “I’m not playing a game anymore, Georgia. You’re mine now. The chastity belt stays—for a full week, just like you told me.” His lips came down on hers then, pressing against her mouth until she felt herself melting into his kiss, opening her mouth to receive his tongue despite her best intentions not to encourage him.

“Please,” she whispered. “Unlock me.” But even as the words came out of her mouth, she knew that if he did unlock her, she’d be disappointed. This man—this stranger—was making her fantasy come true.