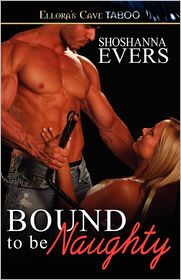 Buy BOUND TO BE NAUGHTY in print at Ellora’s Cave or wherever books are sold. (If they don’t have it in your bookstore, you can order it!)

Blurbs for the books in the Bound to Be Naughty anthology:

Security guard James Tannen has been lusting after art history professor Melissa Dwyer since he sat in on her class three years ago. She crashes a private art unveiling at his employer’s house—then costs him his job by stealing a previously stolen priceless painting. She’ll do anything to keep the painting for herself—and James will do anything to get Melissa into his bed.

If James is using her personal book collection as a script for their weekend together, Melissa knows she’s in for a wild ride!

When the studio heads for Mark Cannon’s new action movie discover that their leading man likes to spank his personal assistants, they insist Mark hire a professional submissive who won’t run to the tabloids with his kinky secret.

Andrea is willing to do whatever it takes to get the dirt for her scathing exposé—even if it means learning how to take a spanking from a movie star. She doesn’t realize until it’s too late that Mark Cannon has a lot more in store for her than just a simple stinging bottom.

Georgia Hearn has found the perfect way to make easy cash—performing an interactive BDSM-flavored stage show at the exclusive Gentlemen’s Club. When handsome GC client Jonathan Syler goes up onstage and locks her into a chastity belt, it’s all supposed to be part of the fun. But Jonathan makes it clear he won’t be unlocking her anytime soon.

Buy BOUND TO BE NAUGHTY here