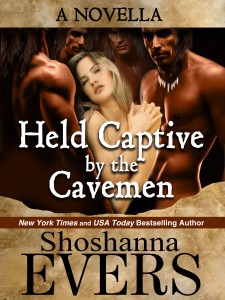 HELD CAPTIVE BY THE CAVEMEN is available on Amazon, Smashwords, and  Barnes & Noble.

“Hold on to your seats and take the wild ride of eroticism with four very studly cavemen and one very willing woman.”
~Jeep Diva Reviews, 5 Stars!

Blurb:
Ellie’s been pushed back in time by her vengeful ex-lover. Now a tribe of frighteningly large, muscular, and very sexy cavemen are holding her captive. And they *all* want a turn.

Warning: This short novella contains dubious consent, forced seduction, the threat of real violence, some m/m action, and a four-cavemen-against-one-modern-woman gangbang—not rape. This is not a romance, it’s erotica. Just to be clear…happy reading.

HELD CAPTIVE BY THE CAVEMEN is available on Amazon, Smashwords, and Barnes & Noble. Please “like” my book and leave a review if you can! Thank you!