Available for a limited time only — and then it’s gone.

Are you ready for 11 alphas that will make you sigh, make your toes curl, and make your panties wet? You won’t be disappointed! We have military, menage, contemporary, and a dash of paranormal romance that will send you right over the edge.

Jump into the action and suspense and find out now how these alphas take care of their women! 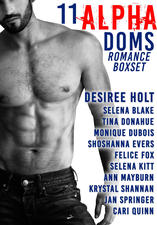 Sign up to be notified when this boxset releases, and for my upcoming new releases!