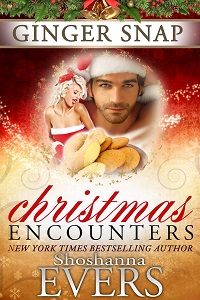 Blurb
Until Tom can be sure their tumultuous relationship will last forever, he can’t give Holly what she really wants for Christmas — an engagement ring. Holly knows she’s naughty enough to get a lump of coal — but she never expected to be taught a lesson with raw ginger!From now on Holly should be on her best behavior…but with this sort of punishment, it’s more fun to be bad…This 11,000 word sexy short novella by New York Times and USA Today bestselling author Shoshanna Evers was originally published by Ellora’s Cave Publishing under the same title. Rated NC-17.

Here’s what reviewers are saying about GINGER SNAP:

“If you’re looking for a well-written, naughty tale with some D/s play and a truly unique twist on kink, then I’d definitely recommend this book.” – Lucy Felthouse, BlogCritics

“With heart and compassion, Evers shows how Holly and Tom learn about themselves and their respective needs in order to make their relationship work. Tom gets in touch with his inner Dom and determines a proper punishment for Holly is ginger-figging.

This spicy discipline turns the heat up on Holly, getting her in touch with her submissive nature. The bedroom play is intensely sexy, hot, and all the while playful, enticing the reader to keep turning the pages to the perfect Christmas ending.” – Lori, The Jeep Diva
“…fun and sexy with passion and a tantalizing bit of dominance.” – Sizzling Hot Books

“Ginger Snap is smoking hot, it’s seriously naughty but above all it’s a wonderful tale of trust and respect and seeing a couple nurturing the seeds of a healthy, fulfilling D/s relationship.

Ms Evers can sure pull out all the stops in a short story! I highly recommend Ginger Snap and defy anyone to be able to pause halfway through – be warned, this is a one stop read from beginning to end.” – Lynn Marie, Happily Ever After

Holly grabbed her shopping bags and started trekking back through the mall to the exit. A jewelry store’s dazzling display case caught her attention. She gazed into the store longingly.
“See anything you like?”
The deep voice behind her startled her out of her reverie. Spinning around in surprise, she smiled. “Tom!”
Her live-in boyfriend of four years laughed and gave her a quick peck on the lips, brushing his tall, muscular body against her as he leaned in for the kiss. “I just got your text.”
“You didn’t tell me you were going Christmas shopping tonight too,” she said accusingly, attempting to conceal her bags behind her back. “I don’t want you to see what I got you, it’s a surprise.”
Tom grinned. “Well, same here.” Except he had no shopping bags. “So, Holly, what shiny thing has you so distracted?”
The engagement rings, of course. Not that she’d tell him that. After four years he should know. Maybe this Christmas?
Don’t get your hopes up, girl.
She’d been so disappointed the last three Christmases, and her last three birthdays, and their last three anniversaries…despite Tom having gotten her perfectly lovely and appropriate gifts. She didn’t want gifts, she wanted him. All of him. She wanted to get married, damn it!
Her silence as she glanced in the jewelry store spoke volumes.
“Holly—” he began.
“What? I didn’t say anything.”
“You’re looking at diamond rings with sad puppy eyes.”
“I am not.” Holly shrugged and started walking. “I’ll meet you at home.”
Tom stepped up to her and wrapped his arms around her waist. “Don’t go.”
Shaking her head, Holly was surprised to realize she was on the brink of tears. It was the damn holidays. Everyone looked so happy, running around, buying presents for their families. It was depressing.
“Come on, Holly,” Tom whispered in her ear. “Forget the jewelry store. Let’s go into the bathroom.”
“I’m fine,” she said, wiping a stray tear from her cheek.
“Not to freshen up, silly. I want to show you how much I love you.” He looked at her with a devilish glint in his blue eyes.
Holly smiled, pulling a tissue out of her purse and wiping her face. “Hmmm…I don’t know. Let’s go home instead.”
Tom took her hand and picked her shopping bags up off the floor. “You’re always telling me that you want to submit to me, that you want me to be more dominant. So I’m not asking—I’m telling. There’s one of those big ‘family’ bathrooms down by the end of the mall, and I want you to meet me in there in five minutes.”
Holly felt a shiver of anticipation run down her spine. Sex? Now? In a mall bathroom? “I don’t know.”
She wanted to. She just needed to feel like he wanted to even more.
Tom picked her up bodily, throwing her over his broad shoulder and carrying her like a fireman down past the stores, her shopping bags swaying in his other hand. He supported her weight as if she were light as a child.
“Tom!” she shrieked, laughing. “Put me down!”
He was right, she had told him on numerous occasions that she needed him to take charge more often. Seemed like he was finally listening.
Other shoppers just smiled and shook their heads as Tom paraded Holly through the mall. He didn’t put her down until he had reached the bathroom door, knocked quickly and then burst in, setting her before him by the large mirror in front of the sink.
“Very romantic, Tom,” she said sarcastically, gesturing to the diaper-changing station. “Just what I always fantasized about.”
Tom dropped her bags on the stained tile floor and lifted her skirt, running his hand along the outside of her panties. “I’m going to make it what you fantasized about.”
She gasped as he ripped her thin panties completely off, leaving her bare. “Those were expensive!” she admonished.
“I’ll buy you more for Christmas,” he said. “Now come on, you wouldn’t tell the man who followed you into the bathroom to ravish you that he mustn’t rip your pretty panties, now would you?”
Holly laughed, getting into the game…

Ginger Snap
Amazon, Amazon UK, Smashwords, iBooks and B&N
Learn more about the other Christmas Encounters novellas!
Whether you enjoy naughty stories to fill your stocking, werewolf shifters, small town contemporary, cowboy ménage, or lesbian love—Christmas Encounters is sure to heat up your holiday! Celebrate the holidays with seven novellas from New York Times, USA Today, and Amazon bestselling authors.