The Thrust, Book 3 in the Pulse Trilogy is available now!

The Thrust, Book 3 in the Pulse Trilogy

Trent Taylor and the people of Letliv, a thriving fishing community on the Connecticut coast, must join forces with the survivors of the FEMA camp at Grand Central to save his sister Annie, who is living on the Tracks as part of the soldiers’ private harem.

Clarissa has spent the past year under control of the soldiers, but Trent’s passionate touch sparks her desire. She’s not entirely sure if she’ll be safe with the mysterious stranger, who still mourns his wife’s untimely death. But with her growing need for Trent, and the danger the women of the Tracks face—Clarissa will have to gather everyone together to fight the rule of the soldiers who keep them prisoner. Could their struggle for freedom—and love—mean an escape from this dystopian nightmare?

Trent glanced at Clarissa, and she offered him what she hoped was an encouraging smile.

Without Trent to help them convince the people of Letliv to join them in their fight to liberate the camp at Grand Central, they’d be lost.

Trent nodded to the group. “And I’ll work with Clarissa, Jenna, and Barker to make a map of the grounds. We won’t be going in blind.”

The meeting adjourned, and Clarissa followed Trent back up to his house.

“Thank you,” she said, when they got into his living room.

They were alone again. Barker and Jenna had gone fishing with one of the crews, determined to put in their fair share of work in the town.

Trent still looked pumped from the meeting, as if his adrenaline and excitement had stayed with him even after the last person had filed out of the church.

“Jenna seemed to think you might have other motives,” Clarissa said quietly. “For asking me to stay with you, I mean.”

Trent paused, looking down at her from his significant height advantage. “I told you I wouldn’t hurt you.”

The air was thick with shimmering desire between them, and for once, Clarissa didn’t attempt to tamp it down.

She hadn’t felt desire, true need, in a long time. Sex on the Tracks was currency, and it hadn’t been fun. Not for her, anyway. Sex with Roy had basically been an experiment with mediocre results. When the time had come for her to actually let Roy inside her, her body had tensed, as if her body remembered what her mind wouldn’t let her forget.

Jenna’s words flitted through her mind. Why deny yourself pleasure?

He stepped in closer, so close they were almost touching.

“But,” he said, “I haven’t been with anyone since my wife died. We were together for ten years.”

Clarissa nodded, feeling suddenly ashamed. He was rejecting her advances, after she’d spent the night imagining that if the bedroom door weren’t locked he’d be all over her.

“No, forget I said anything,” Clarissa said, turning away so he wouldn’t see the shame on her face. What had she been thinking?

Trent reached out and took hold of her arm, gently pulling her back to him. His grasp was strong, but she wasn’t afraid.

“Just forget it,” she said, the heat of his hand still encircling her flesh.

“I don’t want to forget it,” he said. “We both want . . . I do want you. And I think you feel the same the way. We just don’t know what to do with ourselves.” He laughed softly.

“I feel different around you, Trent,” she admitted. “And you’re right, I have absolutely no idea where to go from here.”

Suddenly, his mouth was on hers, her body pressed against his. Her passion spiked, and she opened her lips to let him in.

“What the hell are we getting ourselves into?” he murmured against her lips.

“Let’s not think about it.” She tentatively wrapped her arms around his neck, pulling him in closer. He was so tall. Normally a man of his size would have intimidated her, scared her. But instead she felt protected by him.

His length hardened against her belly, reminding her of his desire, and of his potential power over her. And yet, she wasn’t afraid. For the first time in a long time, the idea of having sex didn’t fill her with dread or emptiness.

“I want you,” she whispered.

“I feel like I’m cheating on her,” he said. “I know I’m not. That she’s gone, forever. That we might not be on this earth for much longer ourselves.”

“We shouldn’t do anything you’ll regret,” she said. But she said it with her body still pressed against his. She didn’t want to regret anything either, but somehow, this felt more right than anything had since the Pulse.

He groaned, kissing her again. “Let’s not think about it, like you said.”

Trent’s hands cupped her ass through her pants, pulling her even closer to him. His hardness pushed against her abdomen, and he lifted her in his arms easily, until she straddled his waist.

“Can I take you into the bedroom?”

Was she really about to do this?

Read the rest of the series!

THE ESCAPE, Book 2 in the Pulse Trilogy is available now on Amazon, B&N, iBooks, Amazon UK 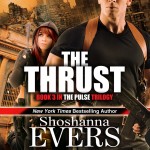 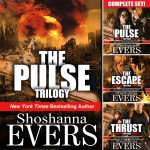 The Escape: Emily’s friend on the Tracks at the FEMA camp in Grand Central, Jenna, escapes New York City only to be tracked down by a soldier who might be her only hope of survival.