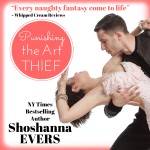 Want audiobook links you can copy/paste & share? Here you go!

By reading any further, you are stating that you are at least 18 years of age. If you are under the age of 18, it is necessary to exit this site.
An Excerpt From: PUNISHING THE ART THIEF
Copyright © SHOSHANNA EVERS, 2010, 2013
All Rights Reserved.

Melissa peeked into the third door again and stepped inside, flipping on a light that illuminated the single large oil painting. Her jaw dropped. It couldn’t be.

Was this really Rembrandt’s only seascape, The Storm on the Sea of Galilee? Impossible. It had to be a replica, because that painting had been stolen in 1990 from the Isabella Stewart Gardner Museum. Two men in police uniforms had handcuffed the museum security guards to railings before the staff realized they weren’t really cops.

It was the biggest art heist in U.S. history. Those men stole about $300 million worth of paintings—not because they wanted to sell them, or ransom them, but because, Melissa presumed, they wanted to go down in history as having pulled it off. And the paintings were all still missing.

Melissa crept closer to the painting. The thieves who had stolen the Rembrandt had cut it out of its frame, destroying the outer margins of the canvas. So if she could just see if the edges were cut, she’d know for certain if it was the real deal or a replica. Although it seemed unlikely that a collector like Mr. Hamilton would have a replica at all, much less one hung in what seemed like such a spot of honor. It had to be the real thing—but she needed to know for sure.

Lifting the frame off the wall, Melissa stumbled under its bulk and weight. The little lamp that underlit the painting was knocked to the floor and smashed. She choked back a gasp of fear as the room fell into shadows once more. She laid the frame on the hardwood floor, wincing at the thud it made. Someone had to have heard that. She paused. Nothing.

Reaching into her beaded clutch, she pulled out her cell phone and turned it on so that the backlight shone down onto the painting. Feeling like a criminal, she carefully separated the canvas from the frame.

It was real. She was looking at Rembrandt’s original stolen painting, knifed edges and all.

She couldn’t just leave the painting there. She had to take it home with her so she could figure out how to handle the situation. She’d have to notify the FBI. But how could she leave with a painting without attracting attention?

If she could remove the painting from the frame, it just might be doable. Melissa slid the canvas completely out of the frame and methodically rolled it, setting it aside in the corner as she stepped back and pondered what to do next.

Lifting the now empty frame, Melissa hung it back on the wall with only the light from her cell phone to guide her, and kicked the shards from the broken light against the wall. In the dark room, it was impossible to tell that anything was amiss. But that wouldn’t be the case forever.

What was going to happen when Mr. Hamilton noticed the painting was missing?

She sensed the presence behind her before she heard James’ voice. “Just what do you think you’re doing, Melissa?”

Melissa turned around, her hands trembling. “James, please, it’s not what it looks like.”

“Turn around,” he said. “Get down on your knees and put your hands behind your head.”

“Now. Or I’m calling for backup to help restrain you.”

Melissa took a shaky breath but she did as he ordered. The long satin gown billowed around her as she kneeled, facing away from him. She could hear him flip the switch and was grateful that she had broken the light, because the fact that the frame on the wall was empty wouldn’t be noticed in the dark. Hopefully.

James cursed under his breath, then said, “Mr. Hamilton hired me to make sure that none of his things are stolen. You’ve been upstairs for way too long. You tricked me.”

“Mrs. Hamilton keeps her diamonds up here. Is that what you were really after?”

Melissa dropped her hands from behind her head in shock. “No.”

“How do I know you didn’t swipe her jewelry? Why else would you be standing alone in the dark except to smuggle the jewels out of here on your person?”

“You can check,” Melissa said, her voice sounding strained and false to her ears. “I don’t have anything.”

“Oh, I’ll check all right. I’m going to search you, and you had better not be lying.”

If only she could escape before he figured out she had removed the painting from the frame. But she had to get the Rembrandt in her possession first. It was still rolled in the corner of the room in shadows.

“Stand up,” he said. “And put your hands on your head where I can see them.”

Melissa stood. She carefully avoided looking at the canvas in the corner or at the empty frame on the wall. From the dim light her cell phone was giving off, she could barely see anything herself. She was woozy with fear and excitement from being alone with James. She would have to do whatever it took to keep all of his attention on her and only her. As long as he didn’t focus on getting the room lit up, she would be home free.

She felt him step up behind her, his powerful torso just inches from her back. He methodically ran his hands up the bodice of her gown, running his fingers across the underside of her breasts the way she had seen female prisoners on television get patted down for drugs and needles. He dipped his hand into the top of her gown and carefully fingered the underwire bra she had on.

Did he just caress my nipple? Or am I imagining things?

His hands came down and patted across her hips and down her buttocks, reaching underneath the hem of the satin dress and gliding up her thighs. Melissa moaned involuntarily at the sudden need she felt in her core. She struggled to keep her hands laced on her head, to keep from reaching out and touching him. He’s just doing his job, she reminded herself. Just because she was getting turned-on didn’t mean that he was thinking about anything other than his employers’ diamonds.

“I don’t feel any jewels hidden away under your gown,” he said softly. He slipped his hand into her panties. “Or did you hide them deeper?”

Melissa gasped as she felt one long finger run along the crease of her labia, pressing gently against her clit for just a second before he inserted his finger into her pussy. Melissa knew she was wet with need, which was more than a bit embarrassing if James really was just searching her body for stolen jewels.

But she heard James murmur appreciatively as he withdrew his finger and rested his hand against her bare skin under the gown. He pressed his body against hers, holding her back to his chest. Her breath caught in her throat as she felt his massive erection pressing against her lower back.

It seemed as if he was getting just as much out of this impromptu body search as she was.

He slid his finger down the crease of her ass and, to her surprise, pushed his finger, already lubricated from her own juices, into her asshole. Her jaw dropped as he withdrew his finger. No one had ever touched her there before.