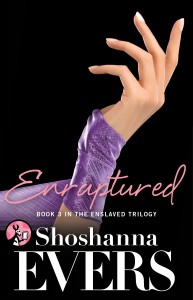 Here’s the blurb, and below that, an excerpt you won’t find in the sample pages!

Lovely, blonde, and young, Jessica accepted a job at New York’s most exclusive BDSM nightclub to make ends meet…and to satisfy her curiosity. Nobody is more intriguing than the BAD boys—Billionaire Arrogant Doms—a trio of unbelievably rich and sexy men. Jessica willingly gets involved with the group, shedding her formerly shy persona to explore the limits of her own desire. But she isn’t sure how vulnerable she wants to be…until the one BAD Boy who never wants to fall in love again—the gorgeous, passionate, and unexpectedly tender Roman—takes an interest in her, and Jessica finds herself drawn deeper into his world than she ever expected.

An excerpt from Enraptured, Book Three in the Enslaved Trilogy

She looked at the small strip of light coming in through the window. Roman had noticed she opened the curtain earlier, but he enjoyed seeing the way the thin rays of sunshine played along her hair, so he let it be.

“It would take a long time,” Jessica said softly, “but eventually I could pay off my own student loans, sir.”

“There are other benefits,” he said. “I can tell you are a natural submissive. In embracing your submission, you’ll find freedom. You’ll be able to let go of your self-esteem issues because you’ll be mine, and you’ll know that I always choose to surround myself with the best.”

Roman frowned. He needed to start this off the right way. Without a word, he grasped her hand in his and pulled her over his knee.

The word “What—” started to come out of her mouth, but she stopped herself and merely looked at him in surprise.

“I told you I’d spank you if you spoke like that about yourself. Stop me now if you want to.”

A mixture of fear and desire glowed in her eyes. “I’m not stopping you, sir.”

Roman lifted her dress, revealing her white cotton panties, and pulled them down. Fuck, she had an amazing ass. It was still a bit red from her earlier paddling.

He brought his hand up and spanked her, a quick, harsh spank that let her know he meant business.

Jessica gasped but didn’t move her legs, just tucked her cheek against the couch, looking at him as he spanked her again, once on each cheek. She didn’t make a sound.

But a spanking needed to hurt to make the point, so he continued until she started sobbing, dry, tearless sobs that sounded like quick, sharp moans. His cock hardened at the sound, at the feel of her pliable flesh beneath his hand.

When he felt she’d had enough, he pulled her panties up and sat her up again, wrapping his arm around her slender shoulders. He wanted to comfort her, but wasn’t sure how, so he held her close, feeling her body heat against his and breathing steadily, hoping his erection would go away.

“Thank you, sir,” she whispered.

His heart raced. She’d thanked him for the spanking. It was so clear that she would flourish under his care. Could she see that? Did she know?

“Please—consider moving into my home as my collared submissive, Jessica. It’s not a proposal I’ve ever given lightly before.”

“Obey me. Submit to punishments if you don’t, like just now. And agree to train with me to bring out your own desires.” He paused to let his words sink in. “Did you like that spanking, Jessica?”

She blushed, a pretty pink that came up through her cheeks. “In the moment, no. But immediately after you stopped, I wished you hadn’t. That probably doesn’t even make sense.”

And then Jessica did something he absolutely wasn’t expecting.

She took his hand in hers and placed it under her skirt, at the junction of her thighs. “You’re welcome to see for yourself, sir.”

Roman fought to keep his hand steady as he felt underneath her panties, his fingers running across her pussy. She was soaking wet with desire. In a moment of need, he pushed his fingers deep within her.

Jessica’s expression turned to one of passion as he found her clitoris and rubbed it in tight circles, wanting to reward her for her submission. She kept her hand over his, soft moans escaping her lips, not unlike the sounds she made when he’d spanked her.

“Oh my God,” she gasped, and he rubbed faster, watching her face, her eyes closed, her long lashes brushing her face.

“As my slave, you’ll have as many orgasms as I want you to, and you won’t be allowed to hold back from me. If you do, I’ll tie you down and force you to come again and again. Whenever I want to, I’m going to fuck you,” he said, thrusting two fingers deep inside her once more, pressing against her g-spot until she bucked against his hand. “And at the end of the day, you’ll either sleep in my bed, or on the floor, depending on how I think you should be rewarded.”

She came hard, her juices covering his hand, but he held his thumb against her sensitive, swollen clit, pressing it, making her face scrunch up tight as her post-orgasmic body tried to make sense of the overstimulation.

“I’ll give you everything, Jessica. I don’t want to be alone anymore. And you don’t want to live in your shithole apartment anymore. Stay with me. Go back to school. Live here, at my estate. Please.”

He’d never begged before, but he found it surprisingly easy to do when her eyes were closed, her pussy captured by his hand, her mouth open in ecstasy.

“Yes. I’ll do it. I’ll be your slave, Roman. Sir.” She opened her eyes and looked at him, breathing hard.

“And you’ll make me happy,” he said. He meant for it to be a command. An order.

Instead, it had the ring of a prayer.