SNOWED IN WITH THE TYCOON, a full length contemporary romance, is available now in ebook, paperback, and audiobook! 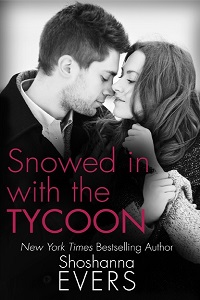 With foreclosure on her home looming and the Geddes Animal Rescue at risk, Sarah Geddes will do anything to save her land from being destroyed for handsome tycoon Mike Cavender’s multi-million dollar real estate development.

Sarah has learned the hard way after escaping an abusive relationship that she can’t trust men. But when Mike is snowed in with Sarah on the very piece of land they are both fighting for, she can’t deny the electricity coursing between them.

As for Mike, well, he has no intention of falling in love again after losing his wife in a car crash four years ago — especially not with the one woman who stands between him and his life’s work. Still, something about Sarah Geddes has him realizing that even when they’re snowed in, things can heat up quickly…

Their desire keeps them hot even in the cold of winter, and this time, she won’t be saying no… Soon Sarah realizes it’s not just her home she is in danger of losing to Mike Cavender – it’s her heart.

Snowed In With The Tycoon is a full-length steamy contemporary romance novel from New York Times and USA Today bestselling author Shoshanna Evers.

Amazon, Barnes and Noble, iBooks, Smashwords, Kobo and in paperback, too!

“I came outside to be alone, Mike, and now you keep trying to delve into my personal life.”
“I’m sorry,” he said. “I mean—I’m not sorry I’m trying to get to know you better. I’m sorry this happened to you.”

She whirled around in his arms, forcing his hands to drop away from her. “I don’t want you to think you can get away with treating me like shit just because somebody else already did.”
Mike stared at her. “I would never—”
“I’ve grown a lot since I left Jeremy,” she interrupted. “I won’t be treated like that ever again.”
“I would never hurt you,” Mike said.
“If that were true then you wouldn’t be trying to get me to sell my home,” Sarah said. “I should never have told you about Jeremy. I just wanted to stand outside and cool off.”
“You should be beyond cooled off by now,” Mike said. “It’s freezing out here.”
“I’m not cold,” she lied.
“Do you want my coat?” Mike started to take off his wool trench coat but Sarah stopped him.
“I don’t want anything from you.” Sarah turned away when Mike leaned down and grabbed a handful of freshly fallen snow.
“I think I’ve just figured a way to get you to come inside where it’s warm,” he said as he pulled her turtleneck shirt open at the top and stuffed the snow down onto her bare skin. The icy coldness hit her like a blast and trickled down between her breasts.
“What are you, twelve?” she shrieked. She picked up snow and threw it in his handsome face.
He laughed and shook his head like a dog before leaning down to make a quick, loosely packed snowball. “Sorry about that. And this.” He threw the snowball and it hit her in the leg, bursting open on her jeans.
“You are unbelievable,” she muttered as she swung her own snowball right at his head. She didn’t pull any punches like he had done. Her snow ball hit hard.
“Wow, you should have been a baseball player or something,” he said. He rubbed his head and laughed when she used the opportunity to pelt him in the stomach with another ball of snow.
“You started it,” Sarah said as she walked over to him. Her hands were freezing from making snowballs without gloves on. “Hope you don’t mind, I need to warm up my hands.”
She shoved her ice cold hands under his coat and let them slip up under his shirt. Her fingers grazed muscle covered in a fine dusting of hair. Mike inhaled sharply.
“Oh, I’m sorry,” Sarah said sweetly. “Is it uncomfortable to have something ice cold on your chest?” She ran her hands up to his pecs.
“I get it, I get it,” he said. “I’m sorry I put snow down your shirt.”
“Oh, that’s fine. But this is your penance.” She let her hands linger, absorbing his body heat into her chilled finger tips.
“Okay,” he whispered. He put his hand behind her head and drew her even closer. Sarah looked up into his chocolate brown eyes as he pressed his lips against hers. Even though his lips felt cold, his kiss warmed her.
She opened her mouth and let him in, kissing him back, running her hands up underneath his shirt.
Her bodyclenched in anticipation of something that could never go anywhere—this kiss could never be enough to slake the thirst she felt for Mike.
“I thought you said this was never going to happen again?” she asked.
“I don’t want to think. I just want to kiss.” He opened his coat and wrapped it around her so her body pressed against his. The warmth of the coat covered her like a blanket. It smelled like him—like expensive cologne mixed with something else uniquely Mike.
“Nice coat,” she said against his lips as he gently nipped at her lower lip. She bit back a moan of pleasure.
“You can have it,” he murmured. “You can have anything.”
Sarah pulled away from his kiss and looked at him, the reality of their situation sinking back in. “I want my mother back.”
Mike stopped kissing her and looked back into her eyes. “I know. But keeping the house isn’t the same as keeping your mother.”

Amazon, Barnes and Noble, iBooks, Smashwords , and in paperback

Love to listen to books? Check out my other audiobooks here. 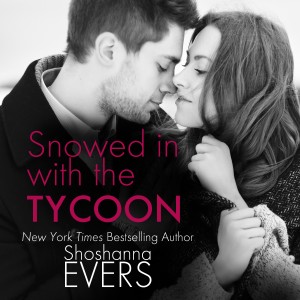