When a knight climbs Rapunzel’s tower to rescue her, she can’t believe her eyes…
it’s the first time she has ever seen a man. 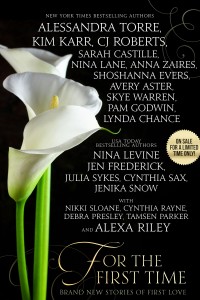 You never forget your first time…
A brand new anthology of original, never-before-read stories from today’s hottest authors, including:

From young heartbreak to a virginity auction, from the chance meeting to the happily ever after, twenty-one exclusive stories explore first love in all its forms. This set includes almost 200,000 words of steamy encounters and sweet romance.

An Excerpt from Rapunzel’s First Knight

He kicked off his black boots and lay back on her bed with his feet crossed casually, as if he had no fear of the witch who had terrorized Rapunzel her entire life. If only she could be as brave as he.

“In the morning when the witch asks you to let down your hair,” he said, “I will indeed hold onto your braid and throw it to her. When she is nearly to the top…I let go. The witch falls to her death, and you are free. We’ll hook the rope up and rappel down.”

“You can’t,” Rapunzel whispered. “You mustn’t. She’ll kill you and then she’ll punish me.”

“I won’t let that happen,” he said sternly. “The prize is too priceless to not see this through.”

“How much?” Money was a concept she knew of, because the witch always told her how much gold and silver it took to pay for Rapunzel’s beautiful dresses, or the feather bedding, or the fine fresh fruits she ate for breakfast. “Sir—I’ll match it. I have an armoire full of dresses fit for a princess. And jewelry, too. You can have it all.”

“You haven’t even looked at my belongings. Please, maybe I can.”

She stared at him in confusion. “I’m not worth anything at all.”

He shook his head and smiled. “I wouldn’t be here if that was true.”

There was something about the way he looked at her when he spoke those words that made her smile at him with true gratitude for the first time since he’d thrown himself into her window.

“I still don’t understand,” she said. “I no longer even have my only treasure—my long hair.” And her hair was the only part of her the witch ever truly seemed to cherish.

Why would the King speak of her?

“No one’s been able to do it yet,” he said. “The witch has killed twenty-seven young, strong men in the past three years, all who felt your value so high to be worth dying for.”

Twenty-seven men. She’d never even known anyone knew about her, or cared. None of those men had ever even gotten close enough to her for her to notice them, much less be saved by them.

Rapunzel wasn’t sure how she felt about being part of an official edict she’d never even known about. What did it mean, to be a prize? Was her captivity to be exchanged for another? There was, however, definitely something intriguing about this knight. He inspired something strange inside of her, something that the witch certainly never had.

“So I’ll belong to you, then, sir—instead of the witch?”

“Would you…stay here with me?” Her prison would be no prison at all if she had a companion such as the man.

“No more tower,” he said. “You’ll be free to experience everything you never could while you were locked up in here.”

Free… she could touch grass. Feel the sun on her skin. Have friends, real friends. What else could she do? Swim in the ocean.

The man grinned at her, as if he could read her mind. “My girl, you have no idea what you’re even missing up here in the tower. There’s so much for you to learn.”

“I don’t even know your name,” Rapunzel realized. “I’ll have to learn that first.”

“Sir Jonathan of Huntington. But you may call me Jonathan.” He paused. “I should have introduced myself earlier. I wasn’t expecting my virgin captive to fight being rescued. My manners escaped me.”

“The virgin captive,” she repeated. The same words from the king’s edict. “So…I understand now that I’m the witch’s captive and not her daughter.”

The words didn’t hurt to say the way she’d expected them to. It did hurt to know that so many men had tried to rescue her, and all the while she’d been lied to and told men only wanted to harm her. Rapunzel had been so convinced she’d almost killed Jonathan before he even got to her window.

“But what is a virgin?” she asked.

“You’ve touched me all over,” she said. “You sat on top of me. My wrists still ache. I’m no longer a virgin, sir.”

He laughed and she knew she’d said something naive again. “I’d have to touch you somewhere else to accomplish that feat, Rapunzel.”

Jonathan took a moment, as if thinking, before getting up off the bed. In the small tower room, it only took him two strides to reach her.

“I’m not afraid of you,” she blurted out. Why had she said that?

“I don’t want you to fear me,” he murmured. “I simply don’t know how to answer your questions.”

“Do you not know the answers?” She smiled. “I thought you knew nearly everything.”

He rubbed his angular jaw. “If it’s warm outside your tower, do you still cover yourself?”

“Yes…” Her dress felt too tight now, in fact, too constricting. Would it be terribly improper to change into a night gown with him there to see?

Would he look at her the same way he had when she’d imitated his spread-thigh position? Because for some reason, the expression on his face had made her feel…powerful. Desirable.

“You cover yourself because you know,” he said, “despite having never been told…that certain parts are meant to only be uncovered for your husband.”

Jonathan leaned his head down and pressed his warm lips against hers.