The Man Who Holds the Whip was a part of the New York Times and USA Today Bestselling
boxed set, Make Me: Twelve Tales of Dark Desire. Enjoy!! 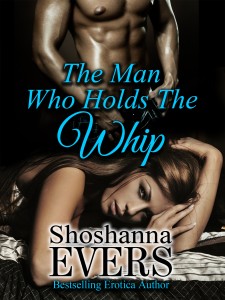 To find out, she’s going to audition for a chance to play Ian’s sexual submissive—and maybe find her way back into his heart.

See what readers are saying about The Man Who Holds the Whip!

“I felt like I was there with Grace and Ian as a happy, comfortable, invisible bystander, marveling at what occurred page after page.”
~ Liberty Ann

“The chemistry between these two characters was sizzling, the sex was hot and you could feel how much they still loved each other even after three years apart.”
~ P. Phan

“Another excellent read from Shoshanna Evers, the characters are likeable, the story fast paced and the sex hot and steamy. Who hasn’t wondered “what if” and this story certainly gives you some ideas. Recommended for someone who likes a hot read to help keep you warm at night..or anytime. Happy reading :)”
~ Jill B.

Excerpt: The Man Who Holds the Whip
Copyright Shoshanna Evers 2012
All Rights Reserved

Ricardo clapped his hands twice, as if to gather their attention. He was shorter than Ian, but had a similar muscular build. He was dressed in a button-down shirt and tie, as if he had a business meeting to attend later. For all she knew, he did.

“You tell her, Ricardo,” Nikki chimed in.

Grace shrugged as if none of it mattered anyway, hoping they wouldn’t notice her trembling hands. “That was never my intention. I’m very sorry for the intrusion. I’ll just be on my w—”

“She said she came to audition,” Ian interrupted. “I say we let her.”

Nikki laughed. “You—audition? Do you even know what that means at a place like this?”

“Well,” Ian placed his hand on her lower back, right above where her shorts rested on her hips. “Would you like to find out?”

Yes. But the word hung on her lips, unspoken. Instead she stood very still, focusing all of her attention on the large, warm hand on the small of her back. Ian’s hand. How could something so gentle make those marks on Nikki? On those other girls?

“Come over here,” Ian said, leading her with an almost imperceptible pressure from his fingers. She walked over to the empty area with him, attached to him it seemed, as if their bodies were fused in that one spot right above her low-rise cutoffs where he touched her.

Ricardo mumbled something and disappeared into his office, reemerging with a few papers and a pen attached to a well-used clipboard. “First I need to photocopy your driver’s license and social security card for my records. Then I need you to sign this consent.”

Grace dug the cards out of her wallet, realizing she’d been clinging to her purse this whole time like a drowning woman clings to a life raft.

Her father had taught her never to sign anything she hadn’t read, so she ignored Nikki’s loud sigh as Grace took her time reading over the three pages. Basically, she was signing her consent to be videotaped, that she wouldn’t have any right to the videotape, and that it became the property of the website. They had the right to show it on their site for no further compensation to her if they wished.

“Can’t…can’t I sign something saying I consent to be videotaped for the audition, but that you won’t put the tape online unless we decide to…work together? Because you’re not compensating me for the audition, right?”

Ian laughed. “Don’t tell me she’s the first one to read the contract, Ricardo.”

Ricardo shrugged. “Fine.” He took her pen, made a big X through the whole contract except for the part about her consenting to be taped and that she had no rights to the tape, and initialed it before handing it back to her.

“Thank you,” she murmured, signing her name at the bottom and setting her purse down out of the way.

Ricardo took the contract and her ID from her. He flipped a switch, and the spot of floor where Grace stood lit up perfectly. Looking at the lights, she could see they were all pre-set and marked on the floor with tape. If anyone bumped into one, she supposed, they could easily re-light the scene without having to stop for more than a moment.

Ricardo grabbed his camera off of one tripod and attached it to the tripod already in place at her…station. She really needed to learn their terminology.

Why? This wasn’t supposed to be real. What was she still doing here?

Ian stepped back, looking at her appraisingly.

“Whenever you’re ready, Ian,” Ricardo said, checking the viewfinder once more before moving back.

Ian smiled at her, that bright white grin of his, and she smiled back without thinking about it. Is this why all those tapes start off with the girls smiling? Probably. It was impossible to look at his smile and not give him one in return.

She took in a shaky breath.

“So, Grace, tell me why you’re here.” Ian spoke in a soft, commanding tone, one her body immediately responded to, as if he were speaking the words inside her head instead of from slightly to the right of the camera.

“Well, um, my…friend…told me about the website and I looked it up and found it interesting.”

Grace’s face heated up and she laughed nervously. “I couldn’t help but wonder why all those girls seemed to like it so much.”

“So you thought you’d try it for yourself.”

“Yes.” The word came out choked, as if against her better judgment.

Ian moved into her space, right next to her, probably because he knew exactly where he’d be in view on the camera frame. “What turns you on?”

Grace shook her head and looked at the black rubber mats down on the floor, anything to avoid looking in those probing blue eyes of his.

“May I touch you?” he asked, and as soon as he did she knew the reason, because she often had to do it herself as a nurse—get verbal consent before doing something the patient—or in this case, the woman—might object to. It was a practical way of avoiding an assault and battery charge. Had that happened to him before? He was getting her consent on camera, no less.

“Yes.” Saying yes gave her a heady thrill that tamped down the bubble of anxiety. Where would he touch her? What had she just consented to?

Ian stroked the top of her hair, carefully pulling it together into a low ponytail in his hands, and pulled down. She had no choice now but to tilt her head up until she gazed into his eyes.

“Do you like that? When I pull your hair?”

Her mouth was dry and she licked her lips, unsure what to say. He tugged gently again and stood over her, his face mere inches from hers. This was unlike any interaction she’d ever had with him in the past.

This is the real Ian.

“And what if I ask you to turn around and bend over for me? Will you do it, or will you be naughty like before?”

The word naughty tickled something deep within her, and she grinned up at him as he let go of her hair.

Grace stopped grinning, although she was pretty confident that Ian was teasing her. “Um, what will you do to me if I…bend over?” she asked, hesitant once more.

“I’m still not convinced you’re even willing to pretend to be submissive for the cameras, much less willing to take direction from me,” Ian said. “Right now, I’m asking you to bend over because you wouldn’t before.”

She turned around, the heat from the lights warming her skin. Ian stood behind her again, but this time all she felt was the moisture between her legs and the butterflies in her stomach as she slowly bent down and grabbed her ankles.

Her hamstrings were going to remember this tomorrow. She wasn’t as flexible as she used to be since she gave up Pilates.

Grace closed her eyes in anticipation, but had to open them again to visually steady herself. Ian stood silently behind her, and she supposed he was watching even though he didn’t touch her.

“Are you going to…” Spank me? But she couldn’t say the forbidden words out loud.

“Am I going to what?” he asked, amusement creeping into his voice. Curiosity, perhaps.

“Am I going to what?” he repeated. It sounded like an order, even though he hadn’t requested anything of her other than an answer.

“…spank me?” she whispered, grateful the hair tickling her burning cheeks obscured her face.

“Do you want me to spank you?”

Oh my God. I’m going to melt into the floor and die of embarrassment.

The way he said, the desire in his voice…she no longer felt embarrassed. Instead she felt sexy.

“Don’t move.” He walked around her in a slow circle until the blood began to rush to her head, making her dizzy.

She gasped as he reached out and touched her hip, a sizzle of heat from his fingertips on her cool skin. But that was it. Just one touch.

“Stand up slowly,” he ordered, and she did, slowly enough that her head rush receded.

“Are you alright?” he asked, the concern in his voice made her smile, as if he had just wrapped her up in a protective blanket with his words.

Ian smiled back. “On camera—and in the bedroom—I prefer to be called Sir.”

The bedroom? If only he’d told her that back when they were dating, maybe things wouldn’t have ended so abruptly between them. But would the old Grace have even entertained the idea of playing kinky sex games? Probably not. It would have sent her running. But now…

“Yes, Sir.” The words felt less foreign in her mouth than she expected them to. Perhaps because he’d made her call him Sir before, if only in her own twisted imaginings late last night, with her hand buried beneath her sheets.

Ian turned to Ricardo, who had been watching their exchange from behind the camera. “This one could be fun to train.”