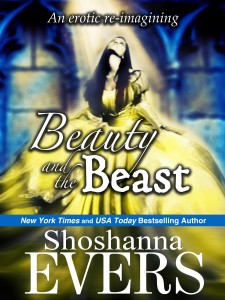 Thank you to my readers, for making Beauty and the Beast a Top 10 Fairytales Bestseller!

Beauty and the Beast is available on
Amazon, B&N, iBooks, Smashwords, Amazon UK, ARe, in paperback, Audiobook,
and you can add it to your Goodreads shelves here!

With her father’s freedom at stake, Belle agrees to be the fearsome Beast’s prisoner in his enchanted castle. Held as his willing captive, Belle must submit to the Beast’s most primal desires to survive.

The Beast can’t let his little Beauty go free, not while there’s still hope that she might be the one to end his decade-long curse…and with true love’s kiss, return him to the Prince he once was.

Their story is one that begins with imprisonment—he in his monstrous body, she in a dungeon—but without this predicament, Beauty would never have met the Beast.

So we shall begin with what occurred on that fateful night when everything changed: when a lover was betrayed, a man deformed, and a castle shrouded in an enchantment…

5 stars! “Shoshanna’s reimagined tale is far more gratifying than its predecessors in that readers get permission to experience a sexual being, a sexual Beauty, with a sexy, kinky Beast.”
~ Jade Onyx (see full review here)

5 stars! “I found myself reading and watching everything unfold in my head. And only great books do that for me. … It is one to keep with you, in your favorites pile.”
~ Tara Vose (see full review here)

I love how narrator Christine Padovan (winner of Best Audiobook 2013) took my story and brought it to life! Christine gives each of the cast of characters in Beauty and the Beast their own style and voice, which makes listening to her narration akin to listening a movie — the scenes unfold in our imagination as her voice talent carries us through. 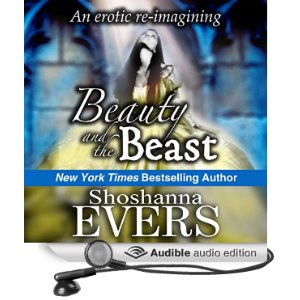 And now… a little sneak peek 😉

Beast bared his fangs, and she cringed.

“Y-you’re smiling,” Belle said. It might take her a while to get used to that.

“I am. I have a proposition for you.” He gently smoothed her skirt back over burning bottom, and turned her around to face him. “I haven’t had a woman in my bed for a very long time. If you’d be willing to sleep with me, I’d reduce your lifetime imprisonment to one short year.”

Belle gasped, both at the idea of sleeping with him, and the idea of a life sentence being reduced to a year.

“You’d crush me to death,” she said, looking up at his towering hulk.

“I would not. Wasn’t I very gentle with you earlier, in your cell, when I made you feel so amazing, as you put it? Right before you—”

Right before she cut him and ran. Yes, she could recall something like that happening.

“It’s really not ‘willing’ if I must bed you for my freedom,” she pointed out.

“Forget I said anything,” he growled. “I’ll see you safely to your cell.”

“Six months, and you do everything I say.”

“It’s—It’s a deal, Beast.” She sighed. “I’m yours for six months. And then you set me free and you forget all about me and my Papa.”

Beast smiled. Yes…definitely a smile. “I very much doubt I will ever forget you, beauty. But I’ll never harm you.”

Her thoughts immediately flew to her sore bottom, at the way he spanked her so thoroughly. Although, it was as he said. He’d hurt her, he had not harmed her. She would remember her punishment when she sat down for a day or two, but it wasn’t like he’d crippled her.

Or ate her. That was something to be grateful for.

Beast looked around his castle as though seeing it for the first time. “I suppose, if you’ll be staying awhile, we could arrange more suitable sleeping quarters for you.”

“In your bed,” she guessed.

“You’ll have your own suite.” He spoke louder, and Belle realized he was probably summoning the fairies. “Belle will need a suite, with a four poster bed, a bath, dresses in the armoire, and a fire ready for her.”

“The fairies can do all that?” she asked.

“Fairies?” He shook his head and began to say something, but it just sounded like growling to her.

“Never mind. If you’d like to believe we have a fairy infestation, then by all means. Believe what you will.” Beast gestured for her to follow him up the stairs and into the west wing of the castle.

She followed, mesmerized by the glorious tapestries and paintings that adorned the long hallways. Where had a beast gotten such wealth?

One oil painting, of a young man, about her age perhaps, caught her eye. His handsome face seemed to draw her in. Belle stopped in front of it, gazing at the portrait.

“Thank you,” Beast said. “I mean…I’m glad you appreciate the art in my castle.”

There was something familiar about the young man’s intense green eyes.

“Perhaps. You would have been a child when this portrait was taken.”

She looked at the inscription on the gold plaque beneath the portrait. It said “Prince Frederick,” and was dated ten years prior. That would have been when she was nine years old, and certainly never out and about, gazing into handsome princes’ green eyes.

For some reason the thought made her sad. What had become of that young man? Perhaps the portrait was from another country. She’d never heard of a Prince Frederick before.

Beast kept walking down the corridor, so she followed.

“I imagine you ate everyone who lived in this castle,” Belle said. “That’s why they aren’t here, and…you are.”

Beast whirled around, and she was so caught off guard that she stumbled against his enormous chest.

“That is not what happened.”

“The painting was ten years ago. Ten years ago, you changed. You told me so. I was merely…taking an educated guess.”

“There was nothing educated about it,” Beast said. “And if you’ll be staying under my roof for the next six months, you might want to reconsider playing guessing games if you want us to get along.”

She put her hand to her mouth. “I apologize.”

“We’re here.” He stopped in front of a large door, with the words “Belle’s Suite” etched into a small silver placard on the door. “If you need anything—”

“I’ll just ask the fairies,” she finished for him.

“Will I be sleeping…uninterrupted?” She blushed as she spoke the words, but she had to know if he’d be taking her up on their deal tonight.

“Dawn is almost here. Sleep as late as you’d like. I won’t bother you until you come to me.”

“But…what if I never choose to…come to you?”

Beast raised his heavy brow. “Your six months begins when you do. Take as long as you need.”

He held opened the door to her suite and she stepped inside, reveling at the sight of the large four poster bed with the flowing white linens, the glowing warmth of the fire burning in the fireplace, and most of all…the roses. They were everywhere, the scent beckoning her.