Here are the blurbs for these books (click on the cover for naughty excerpts, too!) 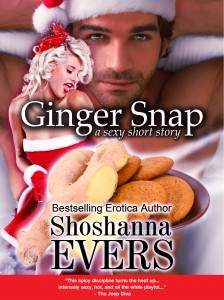 When Holly sits on Tom’s lap to tell him what she wants for Christmas, she knows she’s naughty enough to get a lump of coal—but she never expected to get a hand of ginger root. Peeled ginger in her bottom burns like crazy without causing any actual harm—so the punishment can go on as long as naughty Holly deserves.

Ginger-figging has been used since Victorian times to keep girls from clenching against a proper caning because, as Holly finds out, clenching around ginger has her begging for mercy—and more turned-on than she’s ever been. From now on Holly should be on her best behavior…but with this sort of punishment, it’s more fun to be bad.

This 11,000 word sexy short novella was originally published under the same title by Ellora’s Cave Publishing in 2010. 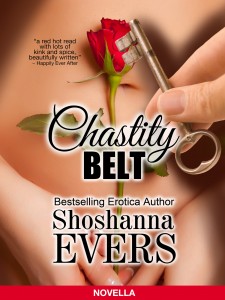 When handsome GC client Jonathan Syler goes up on stage and locks her into a chastity belt, it’s all supposed to be part of the fun. But Jonathan makes it clear he won’t be unlocking her anytime soon.

Reader’s Advisory: This book contains a hot girl-on-girl tease and denial scene and some F/F/M action.

This 22,000 word novella by bestselling erotica author Shoshanna Evers was originally published by Ellora’s Cave Publishing in April 2011 under the same title. 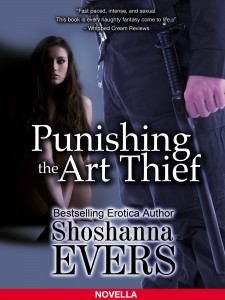 Security guard James Tannen feels no shame in blackmailing the beautiful Melissa Dwyer in exchange for his silence, after she crashes a private art unveiling at his employer’s house — then costs him his job by stealing a priceless painting that’s been missing for decades.

This 21,000 word novella by bestselling erotica author Shoshanna Evers was originally published by Ellora’s Cave Publishing in September 2010 under the same title. 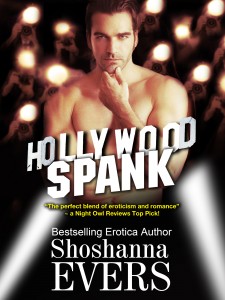 When the studio heads for Mark Cannon’s new action movie discover that their leading man likes to spank his personal assistants, they insist Mark hire a professional submissive who won’t run to the tabloids with his kinky secret.

Andrea is willing to do whatever it takes to get the dirt for her scathing exposé—even if it means learning how to take a spanking from a movie star. She doesn’t realize until it’s too late that Mark Cannon has a lot more in store for her than just a simple stinging bottom.

This 42,000 word short novel by bestselling erotica author Shoshanna Evers was originally published by Ellora’s Cave Publishing in 2011 under the same title.